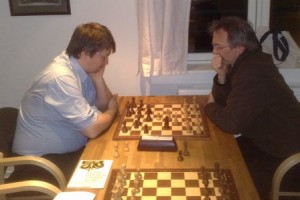 As I was riding home on the bus, I started daydreaming about what a great thing it would be if there were a match between Oslo and San Francisco junior players. I don’t think San Francisco really has anyone who could compete with Magnus Carlsen, but I would love to see Sam Shankland take on Hammer and Danya Naroditsky play Elseth and Nicholas Nip or Steven Zierk play Getz. But why does it have to be a dream? There’s no reason it couldn’t happen! Both clubs (I’m referring to the Mechanics Institute and Oslo Chess Club) have computers. The Oslo club appears to have only three computers, so they might have to bring in some laptops if there were going to be more than three boards, but I assume that’s a solvable problem.

In a way it’s a logical matchup. Both are cities of about half a million people. Oslo probably has a slight advantage because it’s a national capital and thus tends to attract the best talent from the whole country, while San Francisco has to compete with places like Los Angeles and New York. However, if you’re talking about juniors that advantage should be negated somewhat, because most juniors don’t have the freedom to move anywhere they want (at least until they get to college age). Such a match would be more meaningful than, say, Dallas versus Oslo, because Dallas’s players would be mostly imported from Europe. By contrast, all of San Francisco’s players would be homegrown.

Leif Johannessen and John Donaldson, if you’re reading this, why don’t you send each other an e-mail and see if you can set up a match on ICC?